By Grant Elder on December 7, 2014
The myth of 911 TweetShare
About the author:
Paul Craig Roberts, former Assistant Secretary of the US Treasury and Associate Editor of the Wall Street Journal, has held numerous university appointments. He is a frequent contributor to Global Research. Dr. Roberts can be reached at
http://paulcraigroberts.org

RT, one of my favorite news sources, has fallen for a fake story put out by the Pentagon to support the fantasy story that a SEAL team killed Osama bin Laden, who died a second time in Abbottabad, Pakistan, a decade after his first death from illness and disease.  http://rt.com/usa/202895-navy-seal-shot-binladen/

This fake story together with the fake movie and the fake book by an alleged SEAL team member is the way the fake story of bin Laden’s murder is perpetrated. Bin Laden’s alleged demise at the hands of a SEAL team was a propaganda orchestration, the purpose of which was to give Obama a hero’s laurels and deep six Democratic talk of challenging his nomination for a second term.

Osama bin Laden died in December 2001 of renal failure and other health problems, having denied in his last recorded video any responsibility for 9/11, instead directing Americans to look inside their own government. The FBI itself has stated that there is no evidence that Osama bin Laden is responsible for 9/11. Bin Laden’s obituary appeared in numerous foreign and Arabic press, and also on Fox News.  No one can survive renal failure for a decade, and no dialysis machine was found in the alleged Abbottabad compound of bin Laden, who allegedly was murdered by SEALs a decade after his obituary notices. 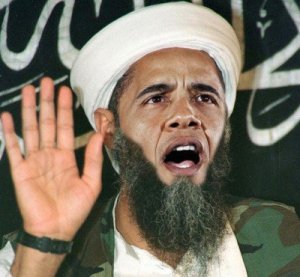