By Grant Elder on January 26, 2015
The Myth We Live in a Free Democratic Society TweetShare

Saudi Arabia is one of the worlds greatest Human Rights violators. It has been common practice to behead women in the streets, give people lashings, dismember… Just like Isis, except the Saudis have been doing it more often. Of course this makes sense since the Saudis have been funding Isis.

The Saudis have been funding Isis in order to disrupt the middle eastern movement toward freedom. That’s why Egypt and every other nation in the area is now a mess.

Of course Isis has been facilitated by the Saudis but it’s the western nations that have been arming Isis as anyone who looks beyond mainstream media knows.

It only makes sense since it is the US that has kept the Saudis in power otherwise the people would have seized power decades ago.

Let’s not forget that 15 of the supposed 19 hijackers on 911 were from Saudi Arabia as well as Osama Bin Laden and the only country in the middle east the US has not bombed is Saudi Arabia.

In return the Saudis have traded their oil in US dollars, done as their told by the US and re-invested their US dollars back into the US economy as well as presidential foundations.

Bow to the King Obama. An insult to America and all people who have fought for freedom. 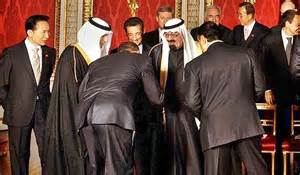 This week with the fortunate death of the psychopathic Saudi King, western leaders have lamented the passing of what they call a reformer.  Everyone of these journalists and politicians that have spewed this garbage should be given 50 lashings a day for a total of 1000 lashes like Montrealer Raif Badawi who made the mistake of wanting freedom of speech in Saudi Arabia. 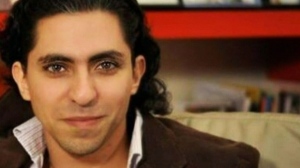 To witness a short intelligent discussion go to the following Abby Martin segment: