Given that Pulitzer Prize-winning journalist Seymour Hersh says Bin Laden death a hoax, what was the alternative media saying

Pulitzer Prize-winning journalist Seymour Hersh says that the raid which killed Osama Bin Laden in 2011 is “one big lie” and that “not one word” of the Obama administration’s narrative on what happened is true. For a high profile journalist like Seymour Hersh to come out with such a scathing indictment of the US government is risky at best. 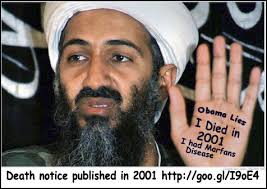 If his conclusions are true then what did the people who have been challenging the official story have to say all along. Following is one of the best exposes on the death of Bin Laden done at Infowars. The short videos tell it all.

In a wide-ranging interview published today by the Guardian, Hersh savages the US media for failing to challenge the White House on a whole host of issues, from NSA spying, to drone attacks, to aggression against Syria.

On the subject of the Navy Seal raid that supposedly resulted in the death of the Al-Qaeda terror leader, Hersh remarked, “Nothing’s been done about that story, it’s one big lie, not one word of it is true.”

Hersh added that the Obama administration habitually lies but they continue to do so because the press allows them to get away with it.
“It’s pathetic, they are more than obsequious, they are afraid to pick on this guy [Obama],” Hersh told the Guardian.

The raid that supposedly led to Bin Laden’s death has been shrouded in mystery for over two years. Speculation that the Obama administration may have embellished or outright lied about the true account of what happened has persisted, mainly because the White House has refused to publicly release images of Bin Laden’s body.

Although the White House said the corpse was immediately “buried at sea” in line with Islamic tradition, it quickly emerged that this was not standard practice.

Numerous analysts have claimed that Bin Laden had in fact been dead for years and that the raid on his alleged compound in Pakistan was little more than a stunt.

Other questions also persist, such as why the narrative and timeline of the raid has changed multiple times, why the White House initially claimed that “situation room” photos showed Obama watching the raid live when in fact there was a blackout on the live feed, and why neighbors in the immediate area surrounding the compound said with absolute certainty that they had never seen Bin Laden and that they knew of no evidence whatsoever to suggest he lived there.

During the rest of the Guardian interview, which is well worth reading in its entirety, Hersh lambastes the corporate press and particularly the New York Times, which he says spends “so much more time carrying water for Obama than I ever thought they would.”

Hersh’s solution is to shut down news networks like NBC and ABC and fire 90% of mainstream editors, replacing them with real journalists who are outsiders and not afraid to speak truth to power.

“The republic’s in trouble, we lie about everything, lying has become the staple,” concluded Hersh.