Jews are not Zionists and Muslims are not Jihadists

By Grant Elder on January 20, 2015
The myth of War TweetShare

The state of Israel is a terrorist organization as much as ISIS is. One thing you should notice and question is the fact that in the news you will see ISIS warriors and they are all armed with brand new weapons. Where did they get them? The war on terror has been waged for 14 years and no one has been able to stop the supply?

In the following report from RT news you can hear directly from an Israeli soldier what is happening to Palestine at the hands of Zionists.

All terrorist groups, such as Isis and Al-Qaeda, are manufactured enemies which our governments created.

The Palestinians don’t get shiny new guns. Why is that?

How is it that Israel, a small nation, has the 13th largest military on the planet and is one of the largest weapons exporters on the planet, with only 8 million people?

How is it that the acts of the terrorist are not focused on Israel given it’s treatment of Arabs and expansionist policies? 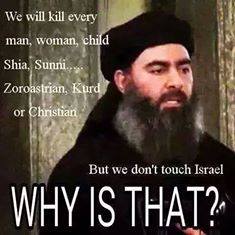