Throughout history, in most cases of economic collapse the societies in question believed they were financially invincible just before their disastrous fall. Rarely does anyone see the edge of the cliff or even the bottom of the abyss before it has swallowed a nation whole. This lack of foresight, however, is not entirely the fault of the public. It is, rather, a consequence caused by the manipulation of the fundamental information available to the public by governments and social gatekeepers.

In the years leading up to the Great Depression, numerous mainstream “experts” and politicians were quick to discount the idea of economic collapse, and most people were more than ready to believe them. Equities markets were, of course, the primary tool used to falsely elicit popular optimism. When markets rose, even in spite of other very negative fiscal indicators, the masses were satisfied. In this way, stock markets have become a kind of dopamine switch financial elites can push at any given time to juice the citizenry and distract them from the greater perils of their economic future. During every upswing of stocks, the elites argued that the “corner had been turned,” when in reality the crisis had just begun. Nothing has changed since the crash of 1929. Just look at some of these quotes and decide if the rhetoric sounds familiar today:

John Maynard Keynes in 1927: “We will not have any more crashes in our time.”

H.H. Simmons, president of the New York Stock Exchange, Jan. 12, 1928: “I cannot help but raise a dissenting voice to statements that we are living in a fool’s paradise, and that prosperity in this country must necessarily diminish and recede in the near future.”

Irving Fisher, leading U.S. economist, The New York Times, Sept. 5, 1929: “There may be a recession in stock prices, but not anything in the nature of a crash.” And on 17, 1929:“Stock prices have reached what looks like a permanently high plateau. I do not feel there will be soon if ever a 50 or 60 point break from present levels, such as (bears) have predicted. I expect to see the stock market a good deal higher within a few months.”

W. McNeel, market analyst, as quoted in the New York Herald Tribune, Oct. 30, 1929: “This is the time to buy stocks. This is the time to recall the words of the late J. P. Morgan… that any man who is bearish on America will go broke. Within a few days there is likely to be a bear panic rather than a bull panic. Many of the low prices as a result of this hysterical selling are not likely to be reached again in many years.”

Harvard Economic Society, Nov. 10, 1929: “… a serious depression seems improbable; [we expect] recovery of business next spring, with further improvement in the fall.”

I hear nearly identical statements from pro-mainstream, pro-dollar skeptics all the time. And all of their assertions rest solely on the illusion of the Dow and the dollar index, not to mention statistics that are sourced from the very government that has much to gain by fooling the public into believing all is well. 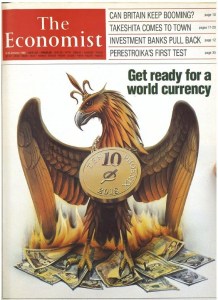 What is the New World Order? Video Gallery