Anti-Austerity Movement following in the path of OWS

When I talk to people in the workforce, they generally wonder what people in the Anti-Austerity Movement want. Is it chaos? This perception they have, is created by the mainstream media, that there is simply a mass of disgruntled people complaining about the state of affairs, for which there is no solution.

The primary problem with the Anti-Austerity Movement, is the same as the Occupy Wall Street Movement, and that is, their are no perceived concrete demands, and so general support is not achieved, and it roles along as a fringe movement until it burns out, while people watch on TV as the police brutalize the protesters.

The general understanding of average Joe, is that these people expect something for nothing, and that the politicians can’t address their concerns, since all western governments are already running deficits. Thus, responding to their demands would only make things worse.

Therein lies the crux of the problem. Most of the general public, and the people participating in the OWS, and Austerity movement, do not understand the causal factors of the current situation. The one thing the demonstrators have, is an understanding that the current situation isn’t working, and their is something fundamentally wrong. How is it, that nations that were once able to build massive infrastructure projects, power plants, roads through mountains, universities etc… can no longer afford to even maintain these things, in a world where productivity has increased 50 fold, since the time these things were built.

If we are to fix the problems of our society, we must understand the systemic roots of the problem, in order to demand and take the proper actions.

Let’s take Canada as a case in point. The Canadian people, with a population of under 15 million, were able to build a railway across the american continent, blasting holes through mountains. They were able to create the St-Laurence sea way, which is a modern feat of engineering, allowing shipping to pass into the interior of the continent. They were able to create some of the most recognized Universities on the planet. During WWI and WWII, they were able to land armies in Europe. At the end of WWII, Canada had one of the largest naval fleets on the planet. In 1974, Canadian debt was $3 billion dollars. Today, the debt for all levels of government stands at over $1.2 trillion and annual interest payments are at $61 billion dollars, and this when interest rates are at an all time low. Not only are the governments in debt beyond reason, but the general public have also increased their debt levels, and we have seen the erosion of the middle class. Yet, at the same time, we are producing as a society more wealth than ever on a daily basis. This example in Canada, is typical of all western nations. So what happened?

The answer starts with the most basic component in the equation, and that is money. Most of the politicians and financiers, as well as the general public, have no understanding of money. They are very cleaver when it comes the manipulation of money and accumulation, but not on money itself. The first question to ask is, where does money come from? The answer is, that it is created out of thin air. This is a notion that is very hard for most people to grasp since they do not ever think about it. Money, is a system of accounting that allows people to trade. It is that simple. The basis for valuation of money, is where it becomes more complex. There have been times where the value of money was tied to gold or silver. This is less important than who creates the money.

In Canada, up until 1974, the Bank of Canada was responsible for the creation of money. The Bank of Canada is a public bank, owned by the people. It would print money, and use it in order to pay for public works and keep people employed, adding value to society. If the government printed too much money, then that would put the value of the money at risk, since you can’t just print money willy nilly and spend on anything. As long as the money is spent on investing in future benefits for the society, then the money supply could grow at a reasonable rate. In times of need, rather than print money and put at risk the value of the dollar, such as in the case of war where there is no future benefit to military spending, the government could issue bonds and the interest paid to the people for borrowing their money would  be returned back into the economy.

What changed? In 1974, the International Banking Community sold  Prime Minister Pierre Trudeau on the idea that it would be better if there was a central banking authority that managed the money. This would help stabilize the world economy and lead toward prosperity and peace. Great sales job! We have seen nothing but the massive transfer of wealth and wars since that time.

Who are these international banks? The answer is, they are private banks for profit. The world bank, the IMF, the bank for international settlements and exchange etc… These are all private banks with names designed to fool the general public. The Federal Reserve, in the US, was one of the first to go through this deceitful transition. People think it is a part of government, but it is not. The Federal Reserve is a Private Bank whose shareholders are the Rockefeller, Rothschild, house of Morgan etc…   In every case these same families are the shareholders of all of these Private Banking Institutions, posing as government banks, as well as the Bank of England. Since 1974 when Canadians have needed money, the Bank of Canada has borrowed the money from the private international banking system. Where did they get the money to lend Canada $1.2 trillion dollars, or the rest of the western nations the $150 Trillion in debt owned by the various countries in the western world? They didn’t have the money, they simply authorized the Bank of Canada to print the money, and then charge interest to the Canadian Government, people, for the money it’s bank put into circulation. It’s a Ponzi scheme, it is illegal, it is conspiracy to steal the wealth of nations. It is at the root of all social problems. It is the reason for western governments being told they must embark on austerity programs, because they can no longer meet their debt obligations.

Today, there is a legal case being fought in Canada called COMER vs Bank of Canada. In Iceland, the people are looking at re-instituting their Public Bank. Why isn’t this mainstream news? Because, the people who own the mainstream media news are the same as the ones who own the shares in the banks. They have control of the whole system.

If we wanted to resolve the concerns of the protesters at Occupy Wall Street, or the Anti-Austerity Movement, then there is only one problem to solve and that is winning the legal case of COMER vs Bank of Canada, or for Iceland to put their Bank into place. Once that happens, it will be difficult to stop other nations from seeing the impact.

It is of course a dangerous path. If you study the history of money you see that these people are ruthless and will start wars in order to distract the people from the primary issue.

We have seen through the years the national alphabet agencies have spied on the citizens and infiltrated their organizations in order to disrupt and discredit with the help of the media. It is very important for people to understand this part of history. We’ve witnessed in Quebec, police officers dressed as hooligans, attacking the police and vandalizing stores in order to give a pretext for the police to attack the peaceful demonstrators. The police chief on the news proclaiming that his officers were just doing their jobs and then the media continues to portray the demonstrators as a band of anarchists. This tactic allows them to increase the discomfort people will experience while trying to practice their freedoms. Shooting young girls in the face is a great way to keep people from rising up against the system. 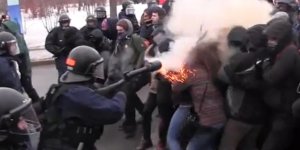 Oddly enough, these same police officers have been vandalizing their vehicles and not wearing their uniforms in protest against cuts to their pensions. Their not bright enough to understand that they are beating on the only people who are fighting for them. 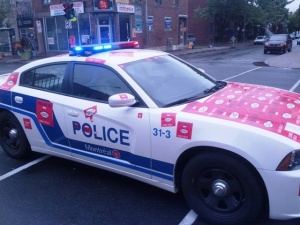 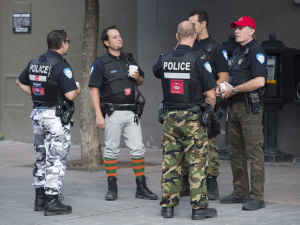 If the Anti-Austerity movement in any nation is to make real social change, the demands will need to be focused and clear so that average Joe can support them and force the politicians to get educated and make the necessary changes to the banking system.

Canada, is in the best situation since the Bank of Canada is not fulfilling it’s legal function since 1974, and the government will be forced to defend it’s position to the people if the case is successful. If the masses are not aware, then the media will continue to ignore it and it will be dealt with behind closed doors out of site and out of mind, while protesters continue to make unfocused noise with the help of agent provocateurs. This will only change if the people educate each-other on this topic and stay single minded and focused in intent.

Bring back the people’s money and stop the Ponzi scheme.