By Grant Elder on April 13, 2015
Money Myth TweetShare
In Canada there is a case before the courts referred to as COMER vs The Bank of Canada. In this legal case a small group of Canadians and a highly recognized constitutional lawyer are sewing the Bank of Canada because it gave up it’s duty in 1974 to print the countries currency so that foreign International banks could do it and charge interest to Canadians. Since then Canadian debt has gone from $3 Billion to $800 Billion and all of the interest paid to off shore bankers who never had the money to lend in the first place. Since these same bankers own the press as well as most of wall street we never hear of these cases. The general population is completely ignorant of money creation and they just shut up like good sheeple and pay their ever increasing taxes.
It would seem there is another group of people who are doing the same in Iceland. Given the relatively small size of Iceland these people could actually mobilize their population to do it. Of course the idea that these international financiers will allow them to do it is ridiculous. These people start wars for shits and giggles.

March 31, 2015  Posted by Raúl Ilargi Meijer at 8:30 pm @
http://www.theautomaticearth.com/2015/03/iceland-to-take-back-the-power-to-create-money/
Who knew that the revolution would start with those radical Icelanders? It does, though. One Frosti Sigurjonsson, a lawmaker from the ruling Progress Party, issued a report today that suggests taking the power to create money away from commercial banks, and hand it to the central bank and, ultimately, Parliament.Can’t see commercial banks in the western world be too happy with this. They must be contemplating wiping the island nation off the map. If accepted in the Iceland parliament , the plan would change the game in a very radical way. It would be successful too, because there is no bigger scourge on our economies than commercial banks creating money and then securitizing and selling off the loans they just created the money (credit) with.

Everyone, with the possible exception of Paul Krugman, understands why this is a very sound idea. Agence France Presse reports:

Iceland’s government is considering a revolutionary monetary proposal – removing the power of commercial banks to create money and handing it to the central bank. The proposal, which would be a turnaround in the history of modern finance, was part of a report written by a lawmaker from the ruling centrist Progress Party, Frosti Sigurjonsson, entitled “A better monetary system for Iceland”.

“The findings will be an important contribution to the upcoming discussion, here and elsewhere, on money creation and monetary policy,” Prime Minister Sigmundur David Gunnlaugsson said. The report, commissioned by the premier, is aimed at putting an end to a monetary system in place through a slew of financial crises, including the latest one in 2008.

According to a study by four central bankers, the country has had “over 20 instances of financial crises of different types” since 1875, with “six serious multiple financial crisis episodes occurring every 15 years on average”. Mr Sigurjonsson said the problem each time arose from ballooning credit during a strong economic cycle.

He argued the central bank was unable to contain the credit boom, allowing inflation to rise and sparking exaggerated risk-taking and speculation, the threat of bank collapse and costly state interventions. In Iceland, as in other modern market economies, the central bank controls the creation of banknotes and coins but not the creation of all money, which occurs as soon as a commercial bank offers a line of credit. The central bank can only try to influence the money supply with its monetary policy tools.

Under the so-called Sovereign Money proposal, the country’s central bank would become the only creator of money. “Crucially, the power to create money is kept separate from the power to decide how that new money is used,” Mr Sigurjonsson wrote in the proposal. “As with the state budget, the parliament will debate the government’s proposal for allocation of new money,” he wrote.

Banks would continue to manage accounts and payments, and would serve as intermediaries between savers and lenders. Mr Sigurjonsson, a businessman and economist, was one of the masterminds behind Iceland’s household debt relief programme launched in May 2014 and aimed at helping the many Icelanders whose finances were strangled by inflation-indexed mortgages signed before the 2008 financial crisis.

Copy of the report posted by Zerohedge at Scribd.

PS Remember how all those people from Iceland were going to go to hell for telling the IMF to go to hell. According to CNN, FOX, BBC, CBC etc…

Icelanders could have shared the same fate as Greeks if they hadn’t had the courage.

It seems the people from Greece have something to learn from them. 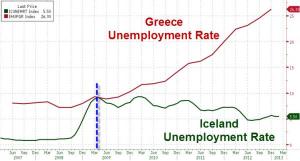